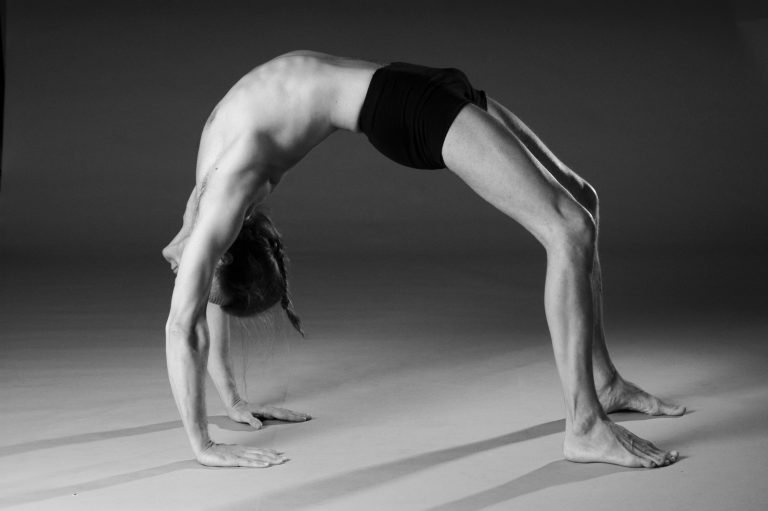 Backbending (Urdhva Dhanurasana) is one of the most rewarding and important postures, yet also one of the most complex. It is deeply rewarding as it assists in releasing emotional tension, physically manifesting as armor around the heart. This does not happen though by simply forcing our way into it and attempting to subdue our body with the ambitions of our mind. A sophisticated approach is needed that takes into consideration the anatomical intricacies of the body.

Lying on our back, exhaling, we bend the legs and draw the heels towards the buttocks. Place the feet down parallel and hip width apart. Now place the hands on either side of your head, middle fingers parallel and pointing towards the feet. Spread your fingers. With the last of the exhalation, lift the torso off the floor just a centimetre.

With the inhalation, in a flowing movement straighten your arms and legs and raise the torso into the air. Do not suck the air in, but breathe in smoothly. Do not thrust the body up, which can lead to strain of the shoulder joints, the sacrum and the spinal fascia.

There is a tendency for many students to turn out the feet and to splay the knees open to the sides with the thighs rolled out. This is a compensation for stiffness in the quadriceps and/or psoas muscles. By opening into the inseams of the legs, more space is gained without having to stretch the hip flexors. Although this may achieve a short-term goal, in the long run it can lead to jamming the sacrum, which leads to low-back pain. Rolling out the thighs engages the lateral hip rotator muscles, one of which, the piriformis, originates via ligaments at the sacrum. If the piriformis spasms from overuse, the sacrum can no longer float in the sacroiliac joints and becomes fixed.

This tendency to turn out the feet and thighs is counteracted by medially rotating the femurs until a neutral position of the legs is found. Medial rotation of the femur is achieved by the tensor fascia latae, gracilis, semitendinosus and semimembranosus (two of the hamstrings) and the gluteus minimus muscles. With this leg position, the hip flexor muscles (rectus femoris and psoas) will be stretched, which is necessary for real progress in backbends. All four corners of the feet will then be equally anchored.

To open the chest we again need to prevent the compensation of the armpits turning out to the side. This is achieved through lateral rotation of the humerus, which is performed by the infraspinatus muscle.

Before animals walked upright, the spine was horizontal like a table, evenly supported on all four corners by four limbs. With an upright stance, the pelvic girdle, the thorax and the shoulder girdle protect most of the spine not only from attackers but also from over-zealous yoga students. One area that conspicuously lacks any protection, however, is the lumbar spine. Since the low back is the softest region, the novice will freely ‘push’ into it to ‘conquer’ the backbend. Instead, breathe into those areas that are tight, which are usually the chest and the front of the thighs, and soften and release there. Simultaneously, support those areas that are weak and soft. This is usually the low back, which needs to be protected by the firm corset of abdominal muscles (external and internal obliques, rectus and transverse abdominis). Additionally, the low back and neck already assume a natural lordotic curve (see figure 1), and over-contraction of these areas in backbends can lead to muscle spasm.

Similarly to the case of Upward Facing Dog, cultivate the support strength of the four pillars: your arms and legs. Once the torso is lifted into the backward arch, the work of the arms and legs conspires to lift the spine higher into the air, lengthening the trunk and alleviating any compression of the vertebrae. Imagine your trunk as a canopy billowing up, mounted on four strong and anchored supports. Protect the neck by lengthening rather than contracting it and releasing the crown of the head in the direction of the floor.

To progress deeper into backbending:

Once you have lifted into Urdhva Dhanurasana and feel you have reached your limit, release some of the tension on those muscles that transported you into the posture and instead engage their antagonists. Around the shoulder girdle, this means releasing the trapezius and deltoideus muscles by engaging the pectoralis major and latissimus dorsi. Along the trunk, release the erector spinae and quadratus lumborum by engaging the abdominals, especially rectus abdominis. At the hips, release the gluteus maximus by engaging the psoas and, in the legs, release the hamstrings by engaging the quadriceps.

This method of releasing the opposites is important for the following reasons:

_    The back extensors contract and shorten the back. This is a useful action for transiting into Urdhva Dhanurasana, but it has its limitations. Continued beyond the objective of arching the back, the movement pinches the spinous processes of the vertebrae together, which prevents any further backward movement.

_    To create a deeper backbend, we therefore need to lengthen the spine and back. This action is performed by the rectus abdominis, psoas and pectoralis major, all on the front of the torso.

_    When pushing up into a backbend, the main muscles that are overcontracted are those in the low back, this being the softest area of the spine. The quadratus lumborum is released and lengthened by engaging the psoas and rectus abdominis.

_    At the commencement of yoga practice, the ribcage of the practitioner often has a wooden and dormant quality. Yogic breathing and backbends help to make it soft and pulsating, ensuring healthy functioning of the vital organs in the thoracic cavity and increasing tidal volume – the amount of air exchanged during normal respiration. With engagement of the pectoralis major muscles, the chest awakens and will open.

How to achieve these movements:

Maintain the support of those muscles that carried you into the posture (back extensors, shoulder flexors, hip extensors and leg flexors) and then engage their antagonists to move deeper into the posture. To engage the pectoralis major in order to open the chest and armpits, make a swiping movement with your hands towards the end of the mat. This action brings the sternum towards the wrists or beyond, as the armpits and chest open.

Now, without compensating, walk your hands in towards your feet. Here engage the quadriceps as if you wanted to flex the hip joint. In this position, however, the hip joint cannot flex, as flexion is prevented by the hip extensor muscles. The quadriceps therefore deeply release and their work straightens the legs. Take up the space gained by bringing hands and feet closer together. Now come up onto the tips of your toes and lift your chest high above your shoulders. Keeping this newly gained height, lengthen your heels down to the floor again.

Engage your abdominal muscles now and use this contraction to lift the entire torso up to the ceiling. Engaging your abdominals will draw the spinous processes of the vertebrae apart. Deepen your backbend now by creating space underneath you.

Ensure throughout that the armpits, thighs, knees and feet do not roll out. Take the stretch into the quadriceps and the rest of the front of the body.

Feel how the inhalations taken into the front of the chest and underneath the collarbones soften and open the ribcage. During the entire backbend the gaze is towards the nose. This drishti helps to prevent overcontracting the neck. Rather than taking the head back to look down to your hands, drop the crown of the head and lengthen the back of the neck.

Engage the latissimus dorsi, which works together with the pectoralis major to extend the arms. The latissimus dorsi also has the capacity to depress the entire shoulder girdle (drawing the shoulder blades down the back). With this function it is the antagonist to the trapezius and levator scapulae muscles. By depressing the scapulae, the trapezius is released and the neck and upper back lengthen. The action of the latissimus dorsi together with the pectoralis major draws the spinous processes of the thoracic spine apart. This arches the chest and enables you to open behind the heart.

Yoga students are sometimes seen standing in Samasthiti with a proudly swelled chest as if attending an army parade. The military attention posture consists of lifting and stretching the ribcage forward as character armour and fortification. This is achieved by hardening behind the heart, which gets us ready for combat. Anatomically this is done through contracting the trapezius and rhomboideus. The rhomboideus adducts the scapulae (pulls the shoulder blades in towards the spine).

To stay open behind the heart in this particular posture we need to release the rhomboids by contracting their antagonist muscle, serratus anterior. Serratus anterior has widely fallen into disgrace and misuse. It is this muscle that sets the shoulder blades wide whenever weight is borne in the hands; it is therefore also a key muscle in Downward Dog and the arm balances. In all of these postures, the position of the shoulder blades needs to be depressed (latissimus dorsi) and abducted (serratus anterior).

The vigorous action of latissimus dorsi has a side effect, which is inward rotation of the humerus (arm bone). The ‘lats’ share this effect with subscapularis and teres major. This medial rotation of the humerus lets the armpits flare out to the side, an action that allows the shoulders to move up to the ears and ultimately decreases the backbend. This action needs to be counteracted by infraspinatus.

Caution: The proper alignment of the armpits must be assessed by a qualified teacher. The action of outward rotation, if overdone, can lead to chronic inflammation of the shoulder joint, especially in the case of someone who already has permanently outwardly rotated humeri.

Exhaling slowly, come down. Look up to the ceiling and place the back of the head down. Repeat these steps at least twice more, each time working deeper into the backbend.