BACK PAIN – IS IT COMING FROM MY SACROILIAC JOINTS? Frequently I receive emails from yogis asking for help with their back pain. Without a physical examination it is difficult to make an accurate diagnosis of what is causing the pain, however, specific information can often differentiate between back pain that is caused by the sacroiliac joint, the intervertebral discs or the facet joints of the vertebrae. Even being able to rule in or out a disc problem is a significant step forward on the path to recovery and healing. Knowing the source of pain enables us to avoid aggravating postures and include appropriate therapy that is specific for that problem.

The old classification of ‘non-specific low back pain’ is an out-dated concept that is no longer substantiated. If you look at the prevalence or pre-test probability of sources of low back pain (LBP) the statistics are 40% lumbar disc, 30% lumbar facet joint and 22% sacroiliac (SI) joint. These proportions change according to age with joint pain increasing and disc pain decreasing with advancing age. There are of course other sources of LBP which are less frequent and sometime more serious.

Although in the general population SI joint pain is lower than other sources of back pain, it is relatively high within the yoga population. Some of this is due to pushing our joints to extreme ranges of motion; how we perform seemingly harmless postures; and because many hypermobile people are attracted to yoga. Hypermobility (https://chintamaniyoga.com/hypermobility-a-blessing-or-a-curse/) refers to a greater than normal degree of laxity of our ligaments. It is our ligaments that hold our bones together at our joints. The sacroiliac joint in most people is well stabilised by its wedge shape and the bony corrugations within the joint. However, with few muscles crossing the joint it relies heavily on the passive stability supplied by its ligaments. For this same reason SI joint pain and instability is a common complaint during pregnancy when the pelvic ligaments, under the influence of the hormone relaxin and bearing an increasingly greater load, become laxer. The problem can intensify in multi-parous women.

Sacroiliac pain can happen at any age of adulthood. The SI joint is also the first site of inflammation in inflammatory types of arthritis (Rheumatoid Arthritis, Ankylosing Spondylitis, etc). Here it is usually combined with morning stiffness that lasts longer than 30 minutes and the pain is unpredictable, sharp and variable.

The SI joint is a richly innervated, pain-sensitive structure with nerve inputs from L2 to S3. Its ligaments also have relationships to many muscles and fascia of the pelvis, legs and trunk which is why SI dysfunction can have far-reaching repercussions throughout the body, including shoulder, jaw and cranial dysfunction. Without recapping too much on the anatomy I will instead elaborate on the what and why of the signs and symptoms of SI joint dysfunction. Understanding these is the easiest way to remember and thereby recognise the problem. It will also equip you to be able to intelligently manage and hopefully prevent the same problem recurring.

When the SI joint is the source of pain it is not typically felt above L5 (the lowest lumbar vertebra). Instead the prominent pain is over the PSIS (the bony protrusion on the back of your pelvis). In fact, when asked “Exactly where is the pain?” the person will often point their finger very specifically within 1cm to the PSIS (see red star on header picture). This is called Fortin’s Finger Sign and when replicated twice is considered a reasonably reliable indicator of pain coming from the SI joint. The pain is usually experienced as a ‘dull, niggly ache’ and can come on after a specific incident or seemingly from nowhere.

SI joint pain happens because the alignment between the sacrum and ilium is no longer optimal and function is compromised. Although the joint undergoes minimal movement, this movement is imperative for smooth, balanced load transfer from the feet, through the pelvis and into the spine. Even with hypermobility the sacrum can jam within the joint in a variety of ways. This is often accompanied by a torque of the pelvis where one pelvic half shifts up and forward and the other back and down. This stresses the SI joint ligaments and the pain that is felt below the PSIS is the pull of the stretch placed upon the posterior sacroiliac ligaments on the side of the pelvis that has shifted forward. This in turn can trigger surrounding muscles to spasm to protect the joint referring pain to the low back, buttock, groin, thigh, knee, calf and foot. The knees especially have an intimate relationship with the SI joints and rely on them for their stability.

Other indicators of whether pain is generated from the SI joint are what aggravates the pain, making it feel worse. These are movements that stress the function of the SI joints, e.g.: when we go from sitting to standing and both ilium need to move on the sacrum to change the position of the pelvis in relation to the sacrum and spine. Besides pain sometimes a ‘catching’ of the joint is also felt during this transition. When extreme, one may need the help of their hands on their knees to stand (Minor’s Sign). This is because the psoas muscle, which crosses the SI joint, is shortened when the joint is jammed. As the psoas has additionally been static and shortened whilst sitting it makes straightening up to standing slow and painful as one attempts to lengthen it.

As the SI joint transfers weight from our feet via the hip joint into the spine, movements that isolate the jammed side can exacerbate the pain, e.g.: working on one leg for a long period of time. Vinyasa classes where a long sequence of different postures are done on the same leg are a common source of SI joint problems. Although walking is lotion for our SI joints, it still requires intermittent standing on one leg and when the joint is inflamed even walking can make it feel worse.

A common way the ligaments of the SI joint are stressed is when hip opening movements are not isolated from the SI joint. For example, when opening the hips in all asymmetrical forward bends like Janu Shirsasana A, Marichyasana A, Supta Padangustasana, etc., it is important to separate the action of the hip joint opening from the forward bend of the pelvis. When you fold forward you need to move both sides of the pelvis forward. For example in Janu Shirsasana A: if your right hip is opening ensure that you also bring the right side of the pelvis forward with the left as you fold forward. Check that it does not lag behind with the leg that you are opening. If it does, you will be stretching the ligaments on the front of the SI joint and this will destabilise the joint. Ligaments are our deep stabilisers and should not be stretched.

Further stretching of the posterior sacroiliac ligament will usually irritate it even if it feels ok at the time, e.g., squaring the hips in twists (Parivritta Trikonasana, Marichyasana C, etc), when having the back heel down in Virabhadrasana A or Parivtitta Parshvakonasana and sitting with your knees crossed. Overstretched ligaments require at least 6 weeks to heal and often do not regain their former strength. When the joint is very unstable compression with an SI joint belt is sometimes needed to aid in supporting the joint. This is often the case with SI instability during pregnancy.

There are many methods to mobilise the sacrum, balance the pelvis, release tight psoas and piriformis muscles and strengthen supporting muscles and fascia – too many to cover in a single blog. Most active and preventative therapy is aimed at supporting the stabilisation role of the ligaments by ramping up the force closure of the SI joints. Much of this is done by the many muscles that converge into the thoracolumbar fascia, including the deep spinal stabilising muscles, the erector spinae, the deep abdominals, gluteus maximus and latissimus dorsi. They help to stiffen the low back and thereby contribute significantly to active stability of the sacroiliac joint. The fascias that connects the latissimus dorsi muscle to the opposite gluteus maximus also provides functional support to the joint. It is often inhibition in these muscles that cause SI joint pain. My favourite exercise to target support strength for the SI joint is what I call the Swimming Salabasana (see picture below). 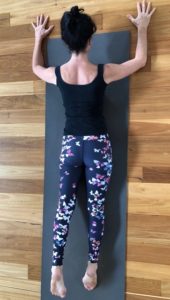 Lying on your belly with your elbows at least at shoulder height lift the low belly away from the floor as you engage uddiyana bandha. Lift your left leg just a little to engage the gluteal muscles. This is not about how high you lift the leg but more about muscle activation. Without moving your hand, draw the right arm down towards your right hip to engage latissimus dorsi – as if you were swimming! Hold for a few seconds and control the descent of your leg. Change sides, synchronising both movements with each other and with your breath. Repeat, working up to ten on each side. On your last repetition raise both legs at the same time to seal both SI joints. Finish with Balasana with an exaggerated rounding of your low-back.

Beyond the above mentioned indicators a musculoskeletal therapist can perform an array of provocative orthopaedic tests to confirm a definitive diagnosis of SI joint dysfunction. Until then, at least an absence of central or axial pain that is below L5 helps to exclude disc pain. Next blog we’ll look at disc pain with and without nerve root compression. Until then… Namaste.

DePalma, M. J. (2015). Diagnostic Nihilism Toward Low Back Pain: What Once Was Accepted, Should No Longer Be. Pain Medicine (Malden, Mass)