Bhakti and the Tree of Eternal Life 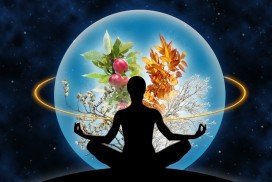 When Paramahamsa Ramakrishna was asked how he attained samadhi his answer was, “Through total acceptance of the gift of samadhi from the Divine.” This is the most direct way! I am not saying other methods suggested should not be practiced, but they should be supplemented and crowned with this effort of Bhakti Yoga. Initially we may struggle to succeed. Then we must ask ourselves, “In what way is my acceptance of the Divine gift and my surrender to the Divine not complete? Where am I holding back?” Asking in such a way will bring about a deep spiritual revolution.

You may wonder, where is this Divine whom you ask me to surrender to and accept samadhi from? Regarding the Divine, we are like certain tribal forest people who have no word for forest in their language, because they have no experience or concept of non-forest. They have never been outside of it. Similarly there is nothing in the world, in our experience or make-up, that is not God. Because we don’t have an experience of non-God, we believe we cannot see God, just as a fish has no concept of the ocean. The truth is, there is nothing in our experience that is not the Divine; as there is only the Divine. When we have admitted there is nothing in consciousness, in the material world, or amongst the trillions of beings that is not God, then we are ready to accept the gift of samadhi.

Q: Practically speaking, what does it mean to “admit” this?

A: Our philosophies of life, whether we follow a religious or scientific paradigm, are based on the belief that we are limited beings and that “out there” is the “other,” whether this be other people, the environment, or the infidels. In most cases, it is an “other” that we have to defend ourselves against. In the Old Testament this belief metaphorically started with us eating from the Tree of Knowledge of Good and Evil. These are loaded terms, but essentially they stand for God and non-God or anti-God. When we ate from this metaphorical tree, we started to believe there is non-Divine, and we became aware of our nakedness. We had to cover up and were expelled from the Garden of Eden and the whole multi-millennia warfare of Kain versus Abel started, which is nothing but war against ourselves.

Today we are still naked, still fighting against ourselves and each other because we still believe there is an “other” to fight against. Psychologically, this is nothing but a part of our psyche fighting against another part, whether we call it the communists, the fascists, the capitalists, the jihadis, etc. Religiously, this is exemplified in the belief in a Devil, the anti-Christ. To propose a Devil is to not know that there is and can be only the Divine. We have projected our own split personality onto God by proposing a Devil. We have constructed a Devil and the corresponding evil within us to prove to ourselves that God cannot exist.

These are powerful beliefs, and while some may say they are not religious and have a scientific worldview, this acceptance of our evil and sinful nature, expelled us from paradise, our symbiotic oneness with nature. Because of that, we could no longer live naked within nature and in harmony with its laws but had to overcome, subdue, control, and exploit them. This led to the whole Gallilean-Cartesian-Newtonian trajectory of rising above and controlling nature and now is finally leading us to the abyss of ecocide and our own extinction.

The ‘admitting’ that all matter, all beings and everything that exists is nothing but the crystallized body of the Divine in the symbolic language of the Bible is to eat from that other tree that grew in the Garden of Eden, the Tree of Eternal Life. We ejected ourselves from the Garden by eating from the Tree of Good and Evil, by accepting that there is a force that effectively neutralizes the Divine. Admitting that this was an error, that there is only the Divine, re-admits us to the Garden.

“Admitting there is nothing in consciousness, in the material world, or amongst the trillions of beings that is not the Divine” means radically ending this trajectory, the conflict of Kain against Abel, the war against ourselves, and the belief in our own evil. It means accepting our own nakedness, which means we are not shielded by nature but live in symbiotic exchange with it. It means we admit there is no “other” and no Devil and that we have left the Garden of Eden only in our imagination. It is still around us and we are welcome to take off the blindfold and start to see again.

Since our whole society and civilization for the last 10,000 years has been built on this foundation of the “other,” the anti-Divine, and therefore our own contamination with ‘evil,’ it is difficult to say what will happen when we make this shift. It will be nothing short of the birth a new civilization based on harmony with each other, nature, and the Divine. However, while it is difficult to imagine how this could pan out, it is easy to estimate what will happen if we continue to maintain this error in thinking and move along the technological trajectory: we will follow the same destiny as the 50 percent of species we have already made extinct. I am not saying that science is evil; what I am saying is that our alienation from ourselves and nature (embodied in the myth of the Tree of Knowledge of Good and Evil) culminated in our modern concept of science and technology, which we use to manipulate, harness, control, subdue and exploit nature. Eating from the Tree of Eternal Life means to rediscover the original unity of all life and creation, which is nothing but a crystallization of Universal Spirit. In It we “live, walk and have our being”.