How to deal with common shoulder injuries 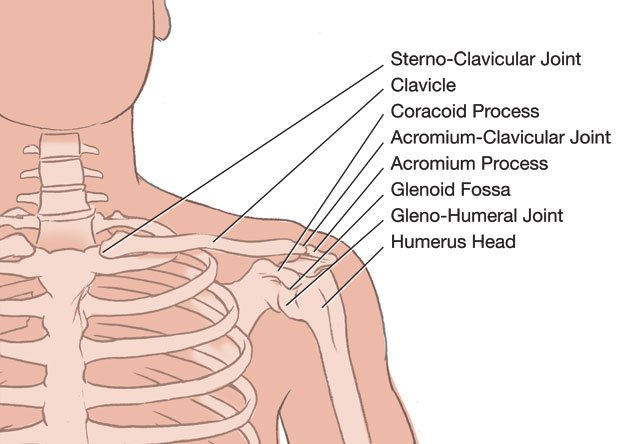 The recent post about rehabilitation of knee injuries saw me receive requests to handle shoulder injuries next. I will also soon cover hamstring tears at the ischial tuberosity.

Most shoulder injuries are caused through rapid movements performed under load. Tears of the glenoid labrum, the cartilage lining of the glenoid fossa, are usually produced in the attempt to catch a heavy falling object. This object can be your own body, if for example you fall off a chair, a ladder or a bicycle and try to brace your fall with your arm.

A common problem is decreased space between the humerus and the acromiocoracoid ceiling, which differs from one individual to the next. If this space is decreased the joint may become inflamed due to constant friction from exercise or repetitive movement. In all exercises where the arms are raised the supraspinatus tendon may rub against the acromion process and coracoacromial ligament and become inflamed. The insertion of the supraspinatus tendon onto the greater trochanter of the humerus has a relatively poor blood supply, making it susceptible to injury and delayed repair. Inflammation may also spread to the infraspinatus and long head of the biceps tendon. Once a tendon is inflamed it can no longer glide properly in its sheath and becomes susceptible to tear during fast movements. The body’s chemical reaction to a chronically inflamed tendon is to either lay down scar tissue in an attempt to repair the damage or the tendon may eventually calcify. These processes make future tears more likely. This is especially possible during dynamic movements which involve a humerus flexed to it’s maximum. They rarely occur in yoga but handstand drop backs and the so-called ‘back flips’ are examples.

Shoulder injuries are more common in those practitioners over 40 years of age. Occurrence is more frequent and recovery is usually slower due to a loss of elasticity and reduced cellular activity. If you should suffer from a shoulder injury most important is to avoid re-injure to your shoulder. If you re-injure your shoulder during the convalescence stage you may set yourself back for many months. After repeated episodes the shoulder injury will be chronic and is less likely to respond to any sort of treatment.

A drawn out shoulder injury often comes together with dysfunction of the lower cervical spine. The arm and shoulder are common sites for referred pain from the cervical spine. The nerves, which supply the muscles of the shoulder, arm and hand, exit the spinal cord between the lowermost cervical vertebrae. If there is any disruption to the nerve supply to the muscles, causing over or underactivity of the muscles, the shoulder joint will be susceptible to injury and its ability to heal will be impeded. For optimal functioning of the spine, the muscles and the nervous system it is important that the cervical vertebrae move freely in all directions. As the shoulder girdle muscles attach to the thorax, it is additionally important for the thoracic spine and ribcage to function optimally. The single most important action to avoid rigidity of the ribcage is to allow the apply the three stages of breathing, drawing the inhalation all the way up into the manubrium of the sternum[1] as described under ‘An intermediate breathing method’. It is one of the reasons why exclusive abdominal breathing must be avoided, as it causes a rigid ribcage. The important word here is exclusive. Exclusive chest breathing is of course equally detrimental. The ribcage must be involved in the breathing process. In the case of shoulder injuries any therapy must involve breathing exercises to draw the breath into the upper thorax and to direct a wavelike healing motion of breath all the way up to the topmost thoracic vertebrae.

Another cause of shoulder injuries involves the inability to use the abdomen as a support structure to lift weight. When we are lifting heavy weights during standing or in fact during all strenuous actions, the abdomen forms a hydraulic system[2]. Supported from underneath with Mula Bandha and by bracing in front with Uddiyana Bandha, the descending of the diaphragm during the inhalation now leads to increased intra-abdominal pressure. With the glottis then partially closed to create the Ujjayi sound, the pneumatic pressure in the chest will rise at the same time and the thorax and abdomen will form one solid support structure, enabling us to lift heavy weights. This is all the more necessary in the case of yogic arm balances. The more the abdominal wall is firmed during lifting (our body) the more the shoulders are supported and kept in an anatomically sound cause of inflammation of the shoulder joint is an imbalance between the muscles on the anterior surface of the ribcage viz the pectoralis major and minor and often the serratus anterior and the muscles on the posterior surface of the ribcage, typically the latissimus dorsi, teres major, lower trapezius and rhomboids.

This imbalance can be slowly acquired through poor posture or faulty technique. A frequent cause would be the failure to shorten ones stance in Chaturanga Dandasana as one increases in strength[3]. If the hands are kept under the shoulders the pectoralis muscles and serratus anterior will continue to build through the constant push up motion. Since the latissimus dorsi, teres major and rhomboids are not getting a comparable amount of exercise they do not grow stronger. The result will be that the anterior muscles will pull the shoulder forward and rotate the head of the humerus internally, all of which can in due time lead to inflammation.

Imbalance of the shoulder girdle may be due to trauma, like that of the catching a heavy falling object, jolting the shoulder in an anterior direction, or even the repetition of smaller stressful movements, such as carrying a growing child. Such trauma can delete or decrease the proprioceptive[4] awareness of the shoulder joint. This simply means that you will perform asanas and believe your shoulders to be in the proper position whereas in fact they are not. It will make the rectifying of our problem more difficult since we have no awareness of it. We can only deduct the problem from the presence of its symptoms, such as pain and/or eventually dysfunction. Often this pain results from the biceps tendon being pulled out of its groove by the fascia attached to the pectoralis major. It is unlikely that we can fix this problem in the practice itself. We will often need to add therapeutic exercises where the muscles in question are isolated so that we can restore proprioceptive awareness.

As mentioned earlier, the rotator cuff muscles act both as stabilisers of the shoulder joint as well as having the ability to produce torque forces for larger movements. An imbalance between these muscles is a common cause of shoulder problems. Inflamed shoulder joints can be due to excessive inward or outward rotation. Either can be pre-existing as a postural imbalance and then lead to inflammation or can be acquired through exercise due to faulty technique.

Most beginners start Downward Dog with their ‘shoulders hunched around their ears, which usually accompanies internally rotated humeri (arm bones). The problem usually starts with an overworked upper trapezius muscle (elevates the shoulders) and the subscapularis muscles rotating the arm bones inward. If not corrected the trapezius and the other muscles build up even more, increasing the already existing dysfunction. Especially during strenuous arm balances or dynamic back bends an already existing imbalance in the shoulders can be exaggerated to the point of inflammation.

On the other extreme are avid students who analyse their imbalances and correct them excessively. There is a pre-existing natural imbalance of strength with the internal rotator muscles of the shoulder girdle being stronger than the external rotators. Most students will, at some point, need to externally rotate their arm bones in Downward Dog, arm balances and backbends. The problem is to know the point when this action is performed to satisfaction and to then allow ones shoulders to settle in the neutral or balanced state. If we go beyond that point through overuse of the infraspinatus muscle (which externally rotates), friction will occur, often involving the biceps tendon. The body will now communicate its predicament through inflammation, which leads to pain and loss of range of motion.

The neutral position of the humerus in the respective postures needs to be assessed by a qualified teacher. Do not expect that the practice just miraculously fixes everything, a belief that would permit you to continue practising without using inquisitive intelligence. Experience shows that usually exactly the opposite happens, viz. students will increase their already existing tendencies and conditioning rather than counteract it to find a state of balance.

Summary of important points in therapy:

This is an excerpt from my 2009 book Ashtanga Yoga The Intermediate Series.

[1] The uppermost part of the sternum, right under the collarbones.

[2] A liquid under pressure in a confined space