Does all Misalignment come from “Incorrect Breathing”? 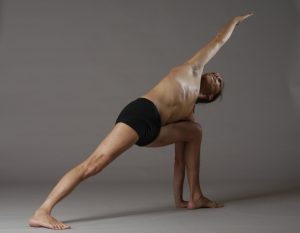 I was asked to comment on the statement, ‘All misalignment comes from incorrect breathing ‘. A teacher said this to one of my students when they explained that they had a postural imbalance. The teacher was insinuating further that if the student would get adjusted “with breath” as in opposed to “without breath” misalignments would sort themselves out.

While it is safe to say that alignment and breath are connected, the first problem that we encounter in the above statement is that “all” misalignments are due to incorrect breathing. How about misalignment that is due to impact during a traffic accident or sporting incidents such as a fall while skiing or horse riding? While we could theorize had we breathed correctly the trauma impact would have dissipated, surely this severely stretches the common usage of the terms “correct” and “breathing”. It is a common and even natural response that after a severe impact the homeostasis and order of your limbs and alignment is so disturbed that it may become dysfunctional. And while breath may play a role in therapy, to make it the sole cause of alignment or misalignment takes it too far.

Another common cause of misalignment is structural. In this case the basic structure of the body, the bones, are asymmetrical. The body now has to compensate resulting in misalignment. Would the fact that one of your femurs or one of your hip bones is shaped or sized completely differently than the other be caused by “incorrect breathing”? Again we could carry theorizing to such an extent that the reasoning would become justified but the result would be that the terms “breath” and “correct” become so general that they become near unusable.

Yet another cause of misalignment is functional. In this case a particular function that we perform over and over again changes the musculature of the body so that the body eventually reacts with asymmetry and eventually dysfunction. Examples would be young mothers carrying babies always on the same hip, which eventually swings the hip up and out the side, leading to pelvic obliquity. Another common example would be women who carry their handbags always on the same shoulder. This shoulder will eventually lift and then pull the head and often even the hips out of alignment. Workers who perform certain tasks always with the same arm or leg will often experience misalignments resulting from their occupation. Would this category of misalignments be caused by “incorrect breathing”? Again it would be a fair stretch to argue this case. For example you would struggle to correct a forward-head position caused by long hours before the computer screen merely by “correct” breathing!

Some of the more skeptic amongst us would then ask, “And how so?” Where does the idea come from that misalignment, posture, etc. have anything to do with breath? In the Taitiriya Upanishad we find the panchakosha model that lays out the human being in five layers. The outermost layer, the body, is an expression or outward projection of the next deeper layer the pranamaya kosha. Here we find the complex term prana, which we can colloquially translate as breath but we have to then interject that we do not just mean outer anatomical breath but also subtle breath such as the prana flowing in the energy channels (nadis) and even the more deeper concept of prakrti (divine creative force), which is for example mentioned by Krishna when he says in the Bhagavad Gita, “All movements in this universe (including those of your body) are performed by my Divine Creative Force (prakrti). Only a fool believes to perform these by themselves.”

I have explained many more connotations to the term prana in my 2012 text Pranayama The Breath of Yoga in the chapter “What is Prana?” The connection between breath and body/alignment is not even just one-dimensional. It is also a faulty posture that impinges on the establishment of a vital breathing pattern. And we could even go further and reduce body and breath to a third and even deeper sheath, the mind. According to Upanishads such as the Taittiriya and the Katha, the body and breath are themselves emanations or outward-radiations of this mind sheath. This is confirmed by Ayurveda, which says that the root cause of disease (vyadhi) is the mind (adhi). A yoga fundamentalist may wish to clothe this into the statement that “all incorrect breathing is caused by the mind or by incorrect thinking”.

And there would even be some truth to that. While yoga accepts that the body is to a certain extent the product of breath/prana it also accepts that prana works and manifests along the lines dictated by thought (vrtti). Yoga then holds that unhelpful or shall we say negative though patterns would over time manifest as life-negating breathing patterns and misalignment. This connection was also confirmed by the ancient master Patanjali who says in the Yoga Sutra I.31, that the nine obstacles to yoga (such as disease and others) express themselves simultaneously on three levels: the physical level, the pranic level (related to breath and life force), and the mental level.

In my 2015 text Samadhi The Great Freedom you will find the following passage: “all obstacles have a physical, pranic, and mental component; thus to overcome them, all three components must be simultaneously (not sequentially) removed. Asana is the technique used to overcome the physical component of the obstacles and conditioning. Pranayama [typically practicing breath retentions while sitting in a meditation posture] is practiced to remove the pranic component of conditioning and the obstacles. And their mental component is suspended by Kundalini and chakra meditation. These three categories of techniques must be seen and used as a compound, rather than isolated practices.”

While simply breathing deeply in a posture while being adjusted by a teacher may be beneficial in its own right, let’s not mystify it. The yogic art of pranayama goes far beyond that. Once the outer three sheaths of body, breath and mind have been made radiant through combined application of asana, pranayama and Kundalini meditation, the two deepest sheaths of which the Taittiriya Upanishad speaks, can be accessed. These are the deep-knowledge sheath and the ecstasy sheath. And it is from here that true alignment issues out into ones periphery.