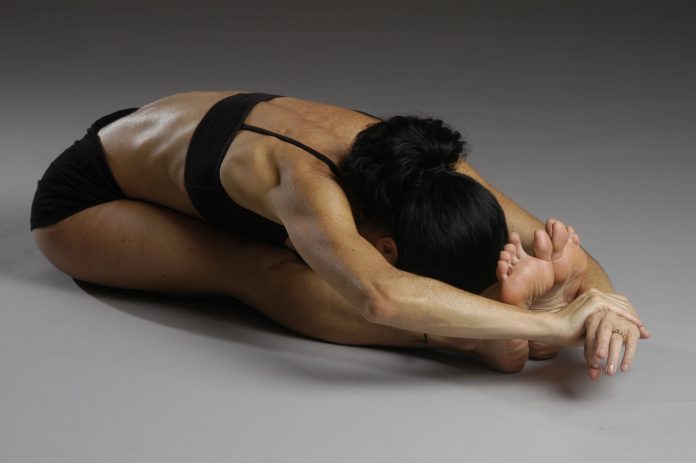 Sitting in Dandasana with legs straight in front of you, exhaling, reach for the big toes. The low back must be kept flat. To round the back in a seated forward bend is the equivalent of bending down from a standing position to lift a heavy object off the floor while rounding the back and keeping the legs straight. To avoid the danger of disc bulge and prolapse it is necessary to keep the low back straight in any weight-bearing situation. This includes all forward bending postures and also leg-behind-head postures like Ekapada Shirshasana. In postures where gravity is the only load, such as Karnapidasana and Bujapidasana, the spine can be safely flexed.

Without resorting to bending your back and/or the use of a strap, you have two options if you are too stiff to reach the big toes in Pashimottanasana. One is to bend the knees and take the toes. This enables the pelvis to tilt forward, which is the imperative first stage of a forward bend. Keeping the iliac crests (upper front of the hip bones) in close proximity to the thighs, work on slowly straightening out the legs. Press out through the base of the feet and, at the same time, reach the sit bones away from the feet. The pubic bone slips down between the thighs. The other option is to take hold of the shins, ankles or whatever you can reach. With a firm grip, slowly work your way forward as the hamstrings lengthen.

Some students will find their hamstrings so stiff that the pelvis tilts posteriorly when sitting on the floor with legs straight. This means that gravity is working against you. In this case, it is advisable to elevate the sit bones by sitting on a folded blanket. This helps to bring the pelvis upright, enabling proper alignment of the spine. Whichever approach you choose, with the inhalation lift the chest and straighten the arms.

Exhaling, fold forward at the hip joints, maintaining the lift created previously. Rather then collapsing the head down towards the knees, lift the heart forward towards the toes. The work of Uddiyana Bandha is important here to support the low back. Do not breathe excessively into the belly, as is often done in forward bending, but encourage the ribcage to participate in the breathing process. The inhalation is used to reach the heart forward, whereas the exhalation is utilised by surrendering deeper into the posture. If this instruction leads to the student ‘bouncing’ up and down, we can conclude that Uddiyana Bandha is not engaged sufficiently. Let these movements be motivated from deep within, working the posture from the inside outwards.

The kneecaps are permanently lifted in all forward-bending postures. As explained in Padangushtasana, the antagonist of each muscle to be stretched needs to be engaged. The muscle group being stretched here is the hamstrings; their antagonist is the quadriceps. For beginners it is often impossible to keep the kneecaps pulled up due to an inability to access the quadriceps. It may seem as if we need to grow a new nerve connection to this muscle. This learned coordination is possible through concentration and perseverance. The teacher may gently press their thumbs into both thighs to ‘awaken’ the quadriceps.

In all forward bends it is important to release and spread the buttocks. The buttocks are often tightened in a fear response to the stretch felt. Tightening the buttocks, however, draws us up out of the forward bend since the gluteus maximus muscle is a hip extensor. The ligaments of the sacroiliac joints (sacrum/pelvis joints) can also be strained. Focus on releasing the buttocks, allowing them to spread, and lengthen through the low back. This is eccentric lengthening of the quadratus lumborum muscle. Eccentric lengthening means that the muscle is active, as we need it to keep the back straight, but at the same time it becomes longer as we elongate the waist. In other words the muscles lengthen against resistance. It is important to create additional space between the hipbone and the lowest rib because a shortened, contracted waist is an obstacle in all forward bending, backbending and leg-behind-head postures.

The shoulders move away from the ears in Pashimottanasana. Contracting the trapezius and levator scapulae muscles hunches the shoulders around the ears and blocks the flow of energy to the cervical spine. Excessive contracting of the neck muscles can lead to a red face in forward or back bending, which indicates a constriction of the blood flow to the head. Use the anchoring of the hands to counteract this, by drawing the shoulder blades down the back, which is called depressing the shoulder girdle (latissimus dorsi), and by drawing them out to the side, called abduction of the scapulae (serratus anterior).

Pashimottanasana is another great posture to demonstrate the principle of simultaneous expansion in opposing directions. The feet, the heart and the crown of the head are reaching forward to elongate the spine. The shoulder blades, the sit bones and the head of the femurs are extending backwards. The elbows and the shoulder blades reach out wide to the sides. The muscles hug the body, compressing prana into the core. The core remains open, receptive and bright. Its luminescence permeates the whole of the posture and shines forth.

The paradox of active release

This is an important understanding that needs to be grasped in order to master the art of working deeply and harmoniously in all postures. Active release derives its effectiveness from the following principle: To enter a posture we use prime muscle groups that perform particular actions. Once in the posture, we must release those muscle groups and engage their antagonists to work harmoniously and more deeply into the posture.

For example, to go into a backbend we engage the trunk extensors (erector spinae, quadratus lumborum). Ultimately, however, these muscles limit backbending. They shorten the back and pinch the spinous processes of the vertebrae together. Once we have arrived in a backbend we need to release the trunk extensors and instead engage the trunk flexors (abdominal muscles). This lengthens the back, creates space between the spinous processes and deepens the backbend.

The same principle is applied in hip rotations such as Ardha Baddha Padma Pashimottanasana and Baddha Konasana. We laterally rotate the femur to go into hip rotations, but when in the posture we release the lateral rotators by medially rotating the femur. This action takes us much deeper into the posture. In all forward bends such as Pashimottanasana we engage the hip flexors, particularly the psoas and rectus femoris, to go into the posture. Once the hip joint is flexed to about 160° we won’t be able to close the joint any further because the bulging hip flexors are in the way. To illustrate, try out the following: Standing, bend the knee joint by merely contracting the hamstrings and the calf muscles. You will not be able to close the joint completely because the very muscles that perform the action also prevent its completion. Now use your hand to draw your heel to your buttock. At the same time resist your hand by gently attempting to straighten your leg. This slight leg extension, performed by the antagonists of the prime movers, will release and flatten out the leg flexors so that the joint can now be completely closed.

In the case of Pashimottanasana the principle of active release is applied by drawing the heels down into the floor. This engages the hamstrings and enables the psoas and rectus femoris to release. Once they are released the front of the hip joint can be fully closed and the forward bend completed.

This action does not mean the kneecaps will be released. The quadriceps, which pulls up the kneecaps, has four heads, rectus femoris being only one of them. If rectus femoris (the only two-joint muscle in the group) is released, the other three heads (vastus lateralis, medialis and intermedius) can still pull up the kneecap and work to extend the leg.

Surrender is most important in Pashimottanasana. This posture is not about conquering the hamstrings but about letting go. To breathe into and release the hamstrings can be very upsetting. We store many powerful emotions such as suppressed anger, competitiveness and fear of inadequacy in our hamstring muscles. All suppressed emotions are potentially crippling to our health: they are toxic and have an impact on our personality. It is essential that, if strong emotions do arise when we breathe awareness into the hamstrings, we acknowledge whatever we feel and then let go of it. Breathing through a posture requires that the stretch be kept at a manageable intensity. If the stretch is too strong we will harden and numb ourselves further. One needs to stretch with compassion and intelligence. Otherwise, instead of letting go of our old unconscious conditioning, we will superimpose yet another layer of abuse.

Another very important action often misunderstood is that of nutation (i.e. forward bowing or bending) of the sacrum. Unless the sacrum is nutated the low back is unlikely to be completely flat in Pashimottanasana. If we nutate the sacrum the forward bend will come from low down, which enables us the keep the spine straight rather than ending up in a forward hunched, apanic (i.e. depressing the vital force downwards) position.

There is no muscle directly attached to the sacrum that can nutate it. Nutation occurs through the simultaneous application of three actions:

All three movements combined will bring about nutation of the sacrum, which enables you to flatten your low back completely and depending how far you are bending forward, even inducing some lumbar lordosis. Notice that this movement also needs to be applied in back bending and Padmasana (lotus posture). Rightly executed Pashimottanasana will actually prepare us for backbends and Padmasana by teaching us to induce sacral nutation. While in back bending it is essential to keep the back arch functional and thus the sacrum and low back safe, in Padmasana sacrum nutation quickly induces ecstatic states (if combined with pranayama and yogic meditation. I have described the respective methods in two other books).

Repeat the posture by holding the outsides of the feet and finally by reaching around and interlocking the fingers or clasping the wrists. Bend your legs more if necessary. These three variations of Pashimottanasana stretch the inside, outside and centre of the hamstrings, which coincide with the three separate muscles of the group: semitendinosus, semimembranosus, and biceps femoris.

This post is a modified excerpt from my 2006 text Ashtanga Yoga Practice and Philosophy.