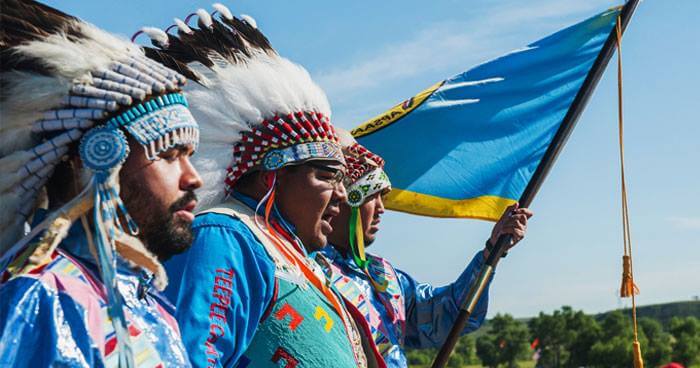 As some of you may be aware Indigenous spirituality has recently been one of my main research projects. Many of our religions, created in the last few thousand years, are so called “sky-religions”, where a deity or deities reside in a heaven far removed from human toil. Alternatively, a sky-religion may propose a state completely abstract from material existence such as nirvana or the formless Absolute. Often such schools of thought then go as far as proposing that the material world and embodied life are mere figments of the mind, illusion, and only the abstract state is true.

Notice how this increasing abstraction in religion has paved the way for our current scientific worldview in which nature is seen as a dead, spiritless world-machine that needs to be controlled, subdued and manipulated. Religion had set the precedent for taking spirit and spirituality out of matter and the world. Similarly the sky-religions’ orientation away from looking for freedom and fulfillment as an embodied life form in harmony within nature, prepared us for our latest obsession with cyberspace. Many modern people literally live within their devices and computers and spend less and less time being connected to nature, the present and their bodies. Focused increasingly on virtual reality, computer games and apps, a cyborg-like existence, i.e. human/machine interface such as implants, is coming closer. The idea that a more total life for us might be possible as a program on a hard-drive rather than an embodied being was already put forward by William Gibson in his genre-defining 1984 novel Neuromancer.

Our current disconnect with nature enables its exploitation and destruction. This disconnect truly began with the sky-religions’ placing of our spiritual aspiration first outside of the biosphere into heaven and then into nothingness/emptiness. From there the trajectory went to science, technology and industrialism and more recently into cyberspace and virtual reality, although many smaller in between steps and facets thereof could be identified. Currently geologists are debating where to set the date for our transit from the Holocene to the Anthropocene and it is becoming more likely that it will be set at the end of WW2. Like others before me I suspect that our leaving of the relatively safe and stable environment of the Holocene by destabilizing the atmosphere and many other important parameters supporting biological life is in fact linked and preceded by our decision to place the sacred/divine outside of life and biosphere into the sky/heaven. Voluminous texts have been written to support this thesis but if it is true then a return to an earth-based spirituality is our best bet to find a way of living with nature as an integrated part of it rather than trying to control and manipulate it. To develop a strategy to do so the study of indigenous spirituality and culture must be one of the main sources. I am writing this sentence with a slight cringe as “developing a strategy” is such a white man’s approach. But then our whole language is reflective of our cultural bias to manage nature through strategies.

When scouting for complete accounts of earth-based spirituality I came across the Lakota (although the term Sioux was initially used derogatorily by their enemies the various Lakota tribes today refer to themselves as the Great Sioux Nation and the two terms are often used synonymously). I had romanticized the Sioux as a little boy when I read about the exploits of their chiefs such as Crazy Horse and Sitting Bull and their victory over the US army at Little Bighorn. Later as an adolescent I was haunted by Dee Brown’s ‘Bury My Heart at Wounded Knee’, which takes it’s title from the final massacre of several hundred unarmed Lakota, mainly women and children, at the hands of the US Army in 1890.

Despite the hardship suffered at the hands of white people many Native American and Sioux shamans (I will later use the more common but somewhat colonialist term ‘medicine men’) refuse to see us, their assailants, as enemies. In fact they believe that we are in a deep spiritual crisis and on the trajectory of self-destruction. Lakota medicine men like Black Elk or Lame Deer believed that it was their responsibility to save us, their white brothers and sisters, from ourselves. I hope to delve into this trajectory and what we can learn from them in some future writings, but will now digress to our current treatment of the Sioux, as it does need attention.

You would have hoped that after centuries of colonial warfare and ample documentation of our unjust treatment of indigenous people we would have learned, but not so. 125 years after Wounded Knee the Sioux are still fighting (peacefully) but this time at Standing Rock.

The so-called Dakota Access Pipeline, a new pipeline connecting oilfields in the north of the US with the refineries in the south, was projected to cross the Missouri river close to Bismarck, capital of North Dakota. Due to the danger to drinking water supplies (oil pipelines always leak) the well-connected, white population of Bismarck rejected this. A new plan was then hatched to let the pipeline cross the river just upstream from the Sioux reservation of Standing Rock with hopefully less resistance to be encountered there.

This didn’t work out though and the way the indigenous people went about their protest can teach us a lot. Instead of fighting against somebody they did call themselves “water protectors”, reflecting their concern that their drinking water aquifer would be polluted by a spilling oil pipeline (in the past all oil pipelines have spilled). Despite the fact that the Sioux were intimidated, tear-gassed in the face, rubber-bulleted and hosed down with water cannons in freezing temperatures they never turned violent.

The eventual, unlikely success of the Sioux in revoking (at least for now) the permit of the pipeline in the face of Big Business interests was supported by three factors: Firstly, the other tribes of the Sioux joined the Standing Rock tribe in protest at what became the Oceti Sakowin camp, complete with tepees and warriors on horseback. Then after invitations to other tribes were extended delegations of over 300 of tribes arrived creating the largest congregation of North American tribes ever. Secondly, as the conflict was increasingly covered in worldwide media numerous international supporters arrived, including indigenous people from other continents.

The final factor and possibly the decisive one was a downright reversal of history. After an increasingly aggressive and violent bullying of the Native Americans and their supporters at the hands of the local security and law enforcement forces was broadcast through social media, a group of 2000 US Army veterans announced that they would travel to Standing Rock and form a human shield in front of the Native Americans to protect them. Coinciding with the arrival of several hundred veterans the Engineering Corps of the US Army (who was in charge of drilling through the pipeline under the Missouri river) revoked the pipeline’s permission.

I think it is important that we remember this as possible future stages of this conflict may play themselves out. As long as we remain peaceful and without antagonizing particular groups of society, we will receive support from unexpected sides. Additionally Standing Rock has shown us that beyond our post-colonialist attitude of, “we have to save those poor indigenous people”, we Whites probably need saving by them at least as much and possibly more.

To get in contact with the Standing Rock Sioux tribe and to donate to their anti-pipeline fund please go to < https://standingrock.org/>

For other ways to support them < https://upliftconnect.com/9-ways-help-standing-rock/>

Developing sensitivity for Native issues when supporting them as a Non-Native < https://upliftconnect.com/12-ways-standing-rock/>