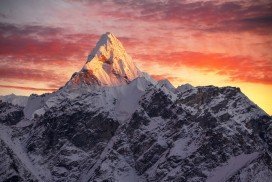 Objectless samadhi is like the summit of a mighty mountain. In order to reach the summit you must decide on an angle of ap- proach. Each path leading to the top represents a particular school of thought, a philosophy, a science, a religion, or a school of yoga. On the way up, your view of the mountain is limited. You see only one side. Because you cannot see the other approaches, it might appear as though your path, the particular school that you follow, is the only feasible one. While you are on the path, this is a reasonable belief. You have decided on your angle of approach and there is no point in fantasizing how the other approaches might have been.

Once you are up on the mountain of objectless samadhi (pure consciousness), the scenery changes. Initially you are overwhelmed by the lofty heights, but after a while you grow accustomed to the view and become curious about the paths that were previously hidden, the ones you fantasized about on the way up. You walk around the edge and look down; to your surprise, you see other paths leading up the mountain and realize people have taken these paths for centuries throughout the ages, although many of the paths have now fallen into disuse. Among the ones on top there is great peace and no squabbling. Although they stem from many different cultures, nobody claims their path is the only way up. That would be foolish, because many who have made it to the summit did not take the same path as you. Allegiance is not important here, because all are united in the peak experience, which is beyond mind and words.

You also notice people on the slopes who haven’t yet attained this bird’s-eye view. They’re shouting to the people beneath them that all other paths are wrong, even satanic, and that only theirs is right. Some are so busy deterring others from leaving their particular paths that they lose sight of their goal of reaching the peak. If only they would reach the summit to see a multitude of paths leading to the top, a new era of peace could begin. We’d see that whatever can be expressed in words is of limited value, even of dubious worth. We would understand the limitations of our own words and perspectives and come to a new era of harmony and peaceful coexistence.

What really matters (perhaps the only thing that matters) is not what you believe to be true, but rather a visceral understanding of the divine origin of all beings, the realization that the Divine expresses itself through all beings, and therefore all beings are sacred. If this experience could be shared among a great number of people, our own inner conflict, and thus conflict with others, would end.