Only if posture becomes effortless can it support higher yoga. 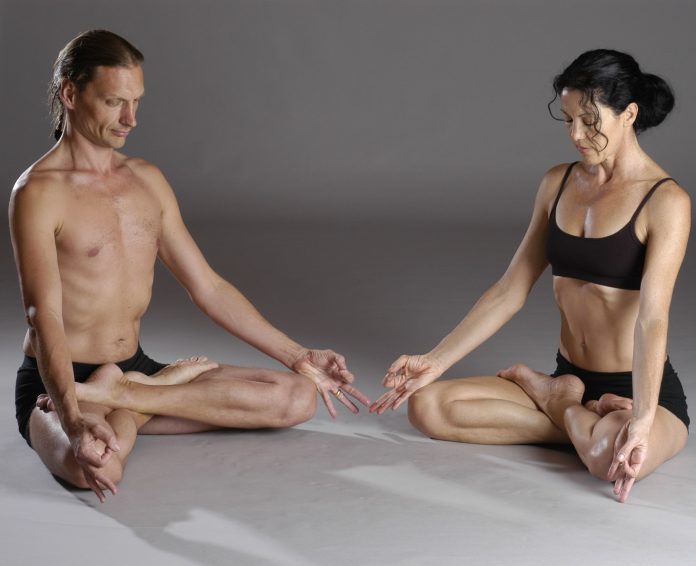 Here is more evidence that the current Yoga-is-gymnastics-with-a-meditative-twist fad does not really stack up to what yoga truly is. In this stanza Patanjali defines the relationship between posture and the higher limbs. Included are many explanatory quotations from other scriptural sources and authorities.

II.47 Posture is then when effort ceases and meditation on infinity occurs.

The sutra is similar to verse 114 in Sankaracharya’s Aparokshanubhuti: ‘True posture is that which leads to meditation on Brahman spontaneously and ceaselessly and not what leads to suffering.’[1] Here again it is implied that as long as we are involved in effort we are not in the true pose. It is the preparatory stage to the pose that is signified by effort and discomfort. When, through training of proprioceptive awareness, the limbs arrive in the correct position, effort suddenly ceases.

The cessation of effort has already been described in sutra II.27. Freedom from doing is there listed as a prerequisite to higher yoga. All effort and intent are finally surrendered in complete detachment (paravairagya), described in sutra I.16. The prana then flows calmly and the disturbing movements of the mind cease. Then occurs meditation on infinity, in which body and mind are experienced as emptiness. This meditation will happen spontaneously, as Shankara says, without any further artificial effort. This is because, once the emptiness nature of body and mind are perceived, the obstacle to meditation on infinity (ananta) is removed.

It is significant, though, that Patanjali uses the term ananta instead of Brahman, which is Shankara’s choice, to denote infinity. Ananta is another name for the divine serpent Adishesha, which is invoked in the ‘Vande gurunam’ chant. One of Ananta’s duties was to provide a bed on which Lord Vishnu could sleep. The Lord had a very weighty appearance at times. When he vanquished the demon king Bali he assumed a form so huge that he strode across the three worlds in three steps (trivikrama). With the third he pushed Bali back into the nether world.

In the Bhagavad Gita,[3] the revelation of the universal form of Vishnu (Vishvarupa) is described thus: ‘Then the son of Pandu [Arjuna] saw the entire universe with its manifold divisions united there, in the body of the God of gods.’[4] Three stanzas later Arjuna exclaims, ‘I see you with many eyes, hands, bellies, mouths, possessing infinite forms on every side; O Lord of the universe, O you of universal form, I see, however, neither your end nor your middle nor your beginning.’[5]

Vishnu is described as the God of infinity and vastness. As we have seen, when it was time to provide a sofa for his sleep, Ananta, the personified infinity, was called. The sofa needed to have two opposing qualities: it needed to be infinitely firm to uphold the vastness of the Lord; on the other hand it needed to be infinitely soft to provide the best of all beds for Vishnu. For this reason Ananta is seen as the ideal yogi, uniting the opposing qualities of firmness (sthira) and softness (sukham), which makes all of his movements true posture.

One may think this a steep call for the third limb only, but Vyasa affirms, ‘When the mind is in samadhi on the infinite, then the posture is perfected’. We need also to understand that the Lord Vishnu is nobody but our own self, as the Yoga Vashishta states. Whereas then the mythological serpent of infinity provides a perfect bed for the God who represents our innermost self, on an individual level, if our body is held in perfect posture, which embraces the qualities of softness and firmness, then we see that very self effortless and spontaneous. In this way asana, although much sneered at by scholars, is an expression of the divine if practised from such a high perspective. Otherwise it is sport only.

The view that Patanjali gives of asana is that of a frame or base for the two highest yogic practices, which are complete surrender (paravairagya) and objectless (asamprajnata) samadhi. Asana is engaged in to create a frame for these practices, its purpose being fulfilled only when we abide in these states. On the other hand, surrender and samadhi occur within asana. As we progress we don’t abandon the lower limbs, but they occur naturally and spontaneously to provide the base for the higher limbs.

This is an excerpt from my 2006 text Ashtanga Yoga Practice and Philosphy.