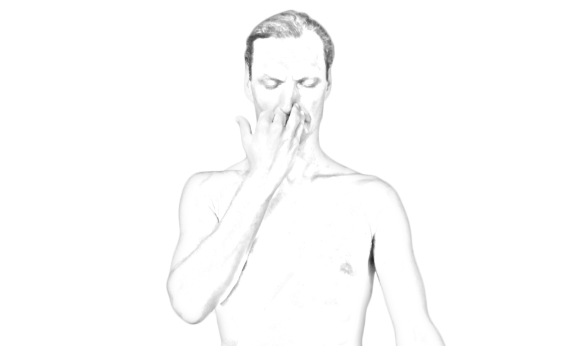 As is the case with many other terms, prana can

have several meanings depending on context. For example some

nostril and expel it through the right and vice versa. Here, prana

prana enter the head, or consciously push it into the arms to gain

strength or direct it into areas of the body that harbour disease. Very

energy channel (sushumna), which, once achieved, produces the

mystical state. In all of these instances prana obviously does not

mean breath but ‘life force’. Breath is the gross expression of the

Goddess and is then frequently described in a personalised form –

it may be called Shakti when thought of as descending, or Kundalini

when thought of as ascending. Again these two terms are often

interchangeable depending on context.

The Brhad Aranyaka Upanishad identifies prana with the Brahman

be the same as the subtle life force, which, although permeating and

moving this entire universe, is still a far cry from pure conscious-

ness? The answer we find in the shanti mantra ‘Sham no mitra’ of

In this invocation we find the important passage ‘Namo brah-

Brahman, I salute you, oh Prana. For you, Prana, are indeed the

directly perceptible Brahman. You alone I shall call the directly

The understanding of this passage is very important. The Brahman

not directly perceptible (other than through an act of grace). But it

can be recognised by its immanent aspect, in our case the prana. In

this shanti mantra the prana is called the immanent aspect of Brahman.

thought is present in all major religions. In Christianity, for example,

are God immanent. Interestingly enough, spirit is the translation of

the original pneuma in the Greek New Testament. The term pneuma

derives from the Sanskrit prana and, even in the English inspiration,

the connotation of inhalation and thus breath is still present.

and mind (T. Krishnamacharya, Yoga Makaranda, p. 44). In the dream state it is withdrawn from the body and

extends only out to the mind. In the deep-sleep state, however, prana

is withdrawn from both body and mind and abides in conscious-

ness. That is why dreaming is not truly restful and not really

It also explains the existence of proverbs in some languages that

and absolutely no activity is present.

Some scriptural passages identify prana as the prakrti (nature,

material cause) of the Samkhya philosophy, and in this case we simply

look at the cosmic impersonal manifestation of what expresses itself

in the individual as breath and life force. The Shatapatha Brahmana

Amrita more often than not denotes a drug derived from a creeper, but in yoga the

amrita is the reservoir of prana in the centre of the brain, the area of

the third ventricle. When the prana is arrested there, immortality is

gained. This immortality, however, does not necessarily refer to

physical immortality, some schools interpreting it as the realization

in the navel chakra (Manipura). In such contexts, prana refers to only

of the broader life force, prana. Prana has two storehouses in the

body, a lunar, mental storehouse in the centre of the brain (Ajna

(prana), but more about that later.

Taittiriya Upanishad above). In this book, if prana is used with the

meaning of life force it will stand by itself. If it is used to denote the

vital up-breath prana vayu, a subdivision of the life-force prana, then

the compound prana vayu is used instead of the simple prana.

(outgoing) function of the nadi system, i.e. the ability of individuals

to actively express themselves through the body, such as moving it

in space and making it perform actions. Prana Shakti is thought of

as working through the right nostril, and breathing methods that

primarily utilise the right nostril therefore make one extraverted and

active. Opposed to that is manas Shakti, the collective term for afferent

(incoming) nadi signals, which are activated through the left nostril.

Breathing through the left nostril makes one more inactive, intro-

verted and reflective, this being a function of manas Shakti rather

This is covered in more detail in the chapter on nadi balance.

To those who reduce the term prana to merely mean ‘breath’

Summarizing, prana is thus the body and actions of the Great

Goddess, with which she causes, produces, maintains and destroys

individual by means of breath. The downward-moving process of

manifestation of individuals (Shakti) and the upward-surging

process of their spiritual emancipation (Kundalini) are the two

directional manifestations of prana. Prana is the God immanent that

permeates and sustains this entire universe and all beings. Addition-

the other. When trying to understand the significance of the term

include all of these possible meanings; otherwise certain textual