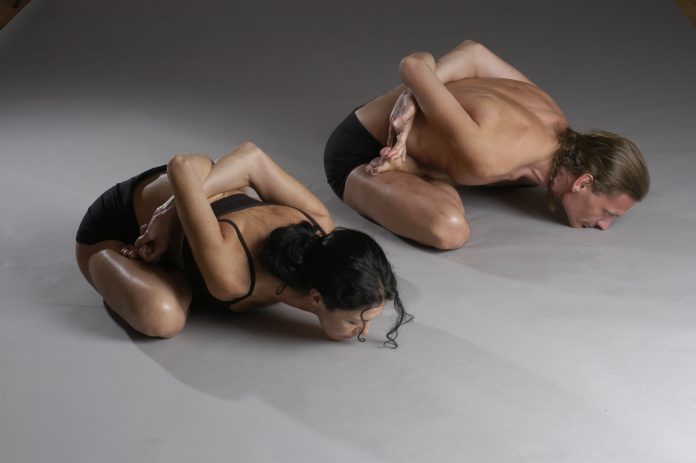 More on what posture was designed to be. A few weeks back I posted my commentary to Patanjali’s sutras II.46 and II.47, showing how far removed modern yoga has become from it’s original concept. Here now sutra II.48, which deepens the inquiry:

II.48 In asana there is no assault from the pairs of opposites.

This stanza refers to the state where true posture is achieved and not the preparatory stage where effort and discomfort prevail.

The first pair of opposites we encountered was firmness versus ease. By simultaneously integrating both extremes, we rest, effortless and free in the core. Then meditation on Brahman is possible. Now Patanjali defines true posture as that in which we rest free from any assault of opposites. The opposites are the extremes to which the mind tries to attach itself. For example, before I meditate I need to gain mastery over hundreds of different yoga postures. This is an extreme, and the mind might claim it in order to understand yoga, which by definition the mind is not capable of doing.

The opposite is the attitude that meditation needs no preparation whatsoever. Here the mind dupes us into believing that no posture and no level of proficiency are necessary for meditation. In between these extremes is the state of pure being, where one just exists unaffected by the chatter of the mind. The mind is constantly trying to figure out what is going on out there. It develops a model of reality and then presents it to the chain of command ego, intelligence, consciousness. If we reach out and identify ourselves with any of those models that are here called extremes or pairs of opposites, then we are returning to conditioned existence and are strictly speaking only attempting yoga. Seeing that we are practising yoga, the mind gets interested in understanding what yoga is. It might say Ashtanga is the right way; other styles are wrong. Or it might say Mysore-style classes are right; talk-through classes are wrong. It also likes to come up with notions such as Hindus are good, Christians and Muslims are bad, or vice versa.

Nowhere is this principle better explored than in the posture itself. We might be in a handstand and the mind might say handstand means pushing the floor away from you. Having attached ourselves to one pair of the opposite we fail to own the other side, which is to reach down into the floor and to draw the heart down into the floor. We have been struck by the assault of the opposites, which means to fall for one extreme and thereby lose our centre.

Let us take backbending as an example: The mind says backbending means contracting the back of the body. But if we ignore the mind and stay unassailed by the extremes, we realise that we have to lengthen the back, because a shortened back cannot arch. If we are in Pashimottanasana the mind might first grasp this pose as ‘thrusting the head to the knee’. A year later the mind might have modified this to ‘pulling the heart to the feet’ – which is much better but still an extreme. Then eventually we stop listening to the mind and arrive there, where every cell of the body awakens and participates in the pose.

If we are then asked ‘What is Pashimottanasana?’ we really couldn’t say any more. Any new concept would be just another set of opposites and extremes. Instead of reaching out and becoming one with concepts and extremes, we abide at the core and spontaneously just exist.

Some commentators erroneously claim that Patanjali is speaking here about a type of anaesthesia, a numbness that arises if we have endured the pain of the pose long enough. This numbness will surely arrive if one promotes it, and in fact many yogis have gone down that avenue. Yoga, however, is a path to pure being that leads to greater sensitivity rather than numbness.

In his commentary on sutra II.15, Vyasa explains that the vivekinah, the discerning one, is like an eyeball sensitive even to the touch of a cobweb, whereas the average person is like any other part of the body, which is numb to the cobweb. The vivekinah is therefore more sensitive to pain and not numb. Nevertheless he stays free, since he knows he is not the pain: he only witnesses it.

Identifying yoga with numbness is a sad development. It robs us of such pristine moments as when we observe the sun rising and the first rays of light piercing a crystal-clear dewdrop on a leaf, and for the first time we observe pure being revealing itself without it being commented upon by our mentation. Then we know that the sun of knowledge has risen within – and no amount of anaesthetic will make that happen.

This is an excerpt from my 2006 text Ashtanga Yoga Practice and Philosophy.