Why I Left the Mysore Community in 1999 – My Statement 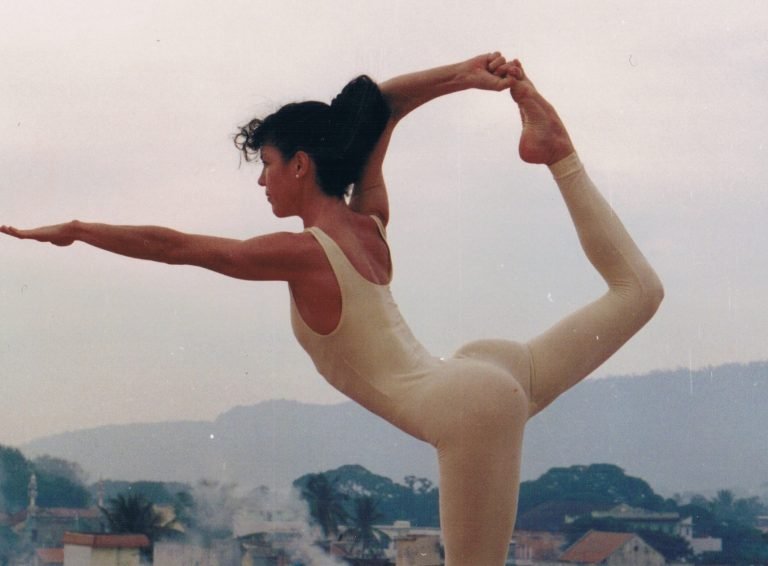 Now that the sexual misconduct of Pattabhi Jois has become common knowledge and while the victims wait their apology students are asking “now what?” What remains is a system of yoga practice and a hierarchy that are equally destructive to individuals, Ashtanga Yoga and yoga in general.

For almost the last two decades my husband Gregor Maehle and I have taught Ashtanga Yoga in its holistic eight-limbed version outside of the ‘KP Jois tradition’. I was one of the first people to be removed from ‘The List’ in the early 2000s. I did not care because I did not want to be associated with what seemed to me a system gone wrong. When attempting to voice any dissent in Mysuru (the previous colonial name was Mysore) or amoungst friends Gregor and I we were publicly and privately condemned. We only dared express our observations and interpretations in the intimate, safe environment of our teacher trainings. It was and still is important to us that the tower of illusion maintained by the Jois tradition does not sully Patanjali’s eight-limbed Ashtanga Yoga.

My first visit to the KPJAYI in Mysuru was in 1995. I was authorised in 1996 after completing the Intermediate series. After three separate visits, totaling eight months in Mysuru I decided there were too many aspects of the Jois tradition that I disagreed with and could not abide by. I did not return after 1999.

1. I felt it was imperative for students to have the opportunity practice all the eight limbs of yoga regardless of physical prowess. Initially we were told that you could only learn pranayama once you completed the Intermediate series of postures. This later was changed to a completion of the Advanced A series. Pattabhi Jois did make some exceptions and allowed a select few to join the advanced asana group although these classes were infrequent. Sharath Jois did not teach pranayama while we visited Mysuru from 1995 – 1999.

2. We understood that meditation was to be reserved for those who had mastered pranayama. However, as the pranayama series was taught with four-minute kumbhakas (breath retentions) this made both pranayama and meditation pretty well out of reach for nearly every student. When I discovered Ashtanga Yoga I had already reaped the benefits of meditation for 13 years. I had no intention of giving up my meditation practice. Gregor also discontinued his study at KPJAYI in 1999 but visited Mysuru once more in 2004 to complete his study of pranayama and meditation, which he began in 1996 with BNS Iyengar (a former student of Krishnamacharya and then Pattabhi Jois). We were only ever taught the single limb of asana at KPJAYI.

3. There were no spiritual teachings or guidance. In the eight months that I spent studying with Pattabhi Jois in Mysuru, I attended every ‘Conference’ held. This time was spent discussing all sorts of things from rasam recipes (a South Indian soup) to the price of gold but never spirituality. I never heard Pattabhi Jois say anything profound. For this reason I referred to him as my asana teacher and had a separate spiritual teacher.

4. And then there is the myth of what makes an ‘advanced yogi’. In the Jois tradition this is based solely on physical prowess. The direct way to receive Ashtanga Yoga ‘certification’ was to complete the Advanced A series of postures and that only in Mysuru. What does the ability to perform advanced asana mean in the realm of an eight-limbed yoga path? It is this very attitude that idolises physical prowess and dictates and upholds it as the foundation of the hierarchy of yogic advancement that sadly makes a circus of yoga. This proverbial carrot of ‘the next posture’ and/or ‘the next series’ often allures students into a practice of discontent, self-coercion, greed, ambition and destruction. The opposite to what one hopes their yoga practice will bring.

5. Time spent in Mysuru was the main criteria that both earned you the next posture and/or permission to teach, i.e. to be authorised or certified. No kudos was given to time spent studying or practising anywhere else or even with a Jois certified teacher. Unfortunately, however, there was little education in the Mysuru room that qualified a student for the role of teaching apart from the limited education of receiving adjustments and more recently that gained from being talked through a vinyasa-count class. My instruction on a new posture was generally “Next posture you do”. When this subject and the insistence that one return to Mysuru every 12-18 months for at least 2-3 months was questioned the standard justification was that it was all about the mystical effects of parampara (the succession of knowledge from one guru to student). Authorised and certified teachers were strictly forbidden to hold their own teacher trainings as this was reserved as a qualification only the Jois family could impart. My interpretation of this was an attempt to monopolise the teaching of Ashtanga Yoga for personal power and profit. I knew the teachings to fall short in equipping students with important teaching skills and to fail the tradition of true Ashtau-anga (eight-limbed) yoga so did not adhere to this restriction.

6. I was fortunate to mainly practice with Pattabhi Jois under the watchful eye of my then boyfriend, now husband, Gregor Maehle. I remember on at least one occasion feeling Pattabhi Jois’ genitals against me. As he did not have an erection I presumed it was innocent poor positioning. I do not remember if this was before or after I met Gregor as I was practising in the small Lakshmipuram shala for two months before meeting Gregor in Mysuru. At the end of class I touched Pattabhi Jois’ feet as was customary to an Indian guru. He only offered his hugs to female students. The rare male insisted. I was fortunate to not have been kissed and groped at the same time. Having been the victim of overt sexual abuse at the age of 19 by the most revered Australian Iyengar teacher at that time, who was more than 40 years my senior, I deeply empathise with those who were abused by a teacher they trusted.

7. Contrary to fellow students complaining about Pattabhi Jois’ faults or flaws I only heard denial, justification, idolisation, projection and worship of someone I experienced as a simple, cute, cuddly old man who accidently stumbled upon fame and fortune. Students told me of dreams they had about him where he gave them guidance and generally created a sense of mystique and awe around him. I did not experience this which made it easy for me to leave.

8. I did witness and personally experience the dangerous adjustments given by K. Pattabhi and Sharath Jois at that time. I would cringe watching others being adjusted and avoiding doing certain postures when they were watching. To the loud “pop” of ligaments being torn Pattabhi Jois would comment “Mmmm, good. Opening”. Mysore became known for My sore knee, My sore back, etc. This damage was not only done in the practice room in Mysuru but is perpetuated by many teachers who have simply copied the same adjustments their teacher gave them. We actively discouraged our students from visiting Mysuru concerned that they would also incur injuries as we had. Many of these adjustments are anatomically and biomechanically unsound and thereby unsafe. I notice that adjustments are now often referred to as ‘assists’. I presume this is an attempt to soften the attitude of the adjuster, however, there is still much that needs to change. As a doctor of chiropractic and a yoga therapist I still often have the broken bodies of yogis on my table. Sometimes I can put them back together again and in some cases they will carry their injuries with them for the rest of their lives.

My personal fear is that as yoga teachers we will lose the PRIVILEGE to use the profound communication tool and healing power of touch. Drawing on my training and skills as a Chiropractor, my contribution to yoga has been and continues to be to revolutionise yoga adjusting that it is the healing art it has the potential to be. We have always encouraged autonomy, open dialogue and verbal consent in the area of students being adjusted and train our teachers to do the same. In the light of past occurrences I urge teachers to formally give students the option to consent or deny being adjusted in asana.

In 2000 Gregor and I removed the picture of Pattabhi Jois from our 8 Limbs yoga studio wall and left only a picture of Krishnamacharya. We held a staff meeting and told our teachers that we would no longer use the title of ‘Guruji’ when referring to Pattabhi Jois but instead his given name. I acknowledge, respect and am grateful for the contribution that Pattabhi Jois has made to yoga and myself personally by making the Ashtanga vinyasa practice accessible to the yoga community. In acknowledgement of this in 2010 I placed a small picture of Pattabhi Jois alongside one of BNS Iyengar beneath a larger picture of Krishnamacharya up on our yoga shala wall. I still could not accept nor appreciate the cult-like system that was built around him.

Our conscious withdrawal from the Mysuru community and the Jois tradition was our silent protest. We were denounced, criticised and rejected especially by other local Ashtanga Yoga schools, teachers and students. I perceived that a cult had been built around the Jois family and the form of Ashtanga Vinyasa Yoga as they teach it. There is much more I could write to elaborate but consciously omit in an attempt to not perpetuate the harm already done with no constructive purpose in confirming my points. Writing this statement is a healing for me. I now feel safe and ready for criticism in finally coming out and publicly speaking the unspoken of my long held conscience except when teaching those whose trust I felt. This open conversation is well overdue. I wish I had had the courage of state this publicly before now. I apologise for any complicity on my part that contributed to the suffering of those who have been sexually, physically and/or spiritually abused. The power behind the abuses committed by Pattabhi Jois and permitted by the Ashtanga community still stands until the tower of illusion built around the Jois tradition of Ashtanga Yoga is fully deconstructed. We need to reclaim Patanjali’s eight-limbed Ashtanga Yoga and free it of this bondage. Finally the time is right and the obvious is captured in the spotlight.

Faith, devotion and worship is appropriate only to the Divine.

If you have not already I recommend:
https://matthewremski.com/wordpress/karen-rain-speaks-about-pattabhi-jois-and-recovering-from-sexual-and-spiritual-abuse-video-interview/