An Apology of Sorts from Sharath Jois 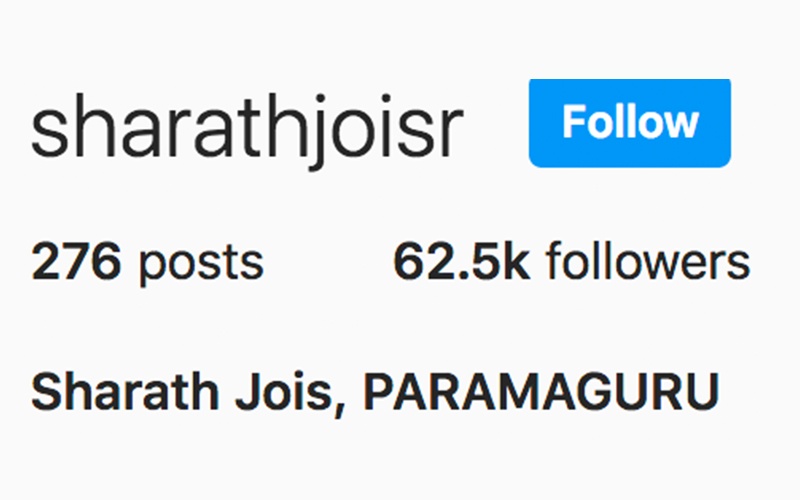 “Growing up I was very close to my grandparents. When I recall learning asana from my grandfather it brings me immense pain that I also witnessed him giving improper adjustments. I did not understand and felt helpless. I am sorry that it caused pain for any of his students. After all these years I still feel the pain from my grandfather’s actions.
We must have zero tolerance towards abuse, mishandling, or touching students inappropriately. Teachers should respect students at all times.
We all have a responsibility to govern the teachings and protect against wrongs. Many times I have wondered why the senior students who were at the Lakshmipuram shala did not support the other students when they saw these things occur? They have moved on to become famous teachers worldwide. Why did they not act in support of their fellow students, peers, girlfriends, boyfriends, wives, husbands, friends and speak against this?
My grandfather was my guru. He taught me everything I know about Asana, and I loved him, but I’m extremely sorry for those students who are going through this trauma. I understand your pain. It is my humble request to all those students harmed to forgive him for his actions. By acknowledging the past wrongs I hope you will be relieved from this terrible burden. It is my sincere hope that we can prevent abuse from ever happening again.
Namaskara 🙏🙏🙏”

Firstly, I want to commend Sharath for acknowledging this at all. We have waited for this for such a long time that it felt overdue, unreal and almost unexpected when it finally came. I think this is a huge step forward from the silence we had to listen to for the last 18 months. I do hope that this is not the end but the beginning of a dialogue. In this spirit and keeping in mind that I feel great relief at this first step I want to offer a few observations:

Sharath, you are using the terms “giving improper adjustments”. To call grabbing a student’s breasts or genitals or to dry-hump them “giving improper adjustments” is unhelpful and hurtful to the victims. It is this language that was used for three decades to cover up your grandfathers assaults. Let’s not continue it. You can read up on Guy Donahaye’s Facebook group https://www.facebook.com/AVPJSA/ what language is appropriate and what isn’t. It would be important to say things like “I acknowledge that my grandfather KP Jois sexually assaulted and abused some of his students”.

Another point that is really important when making an apology is that one confesses in what way one has contributed by enabling (i.e. “I saw, stood by and did nothing and I’m really sorry about that”).

Very important is also to state in what way one has benefited from enabling, such as “through not speaking up and confronting KPJ I inherited a vastly profitable family business and immense power”. Again, you would find valuable guidelines in Guy’s FB group https://www.facebook.com/AVPJSA/.

Also, when making an apology it is really important that one does not use it to shoulder off some of the blame to others. While parts of your apology appear heartfelt it then veers off into attacking those Western “Lakshmipuram senior teachers” who became “famous teachers worldwide”. While you are right that the ball is in their court now and we are keenly awaiting their statements, one’s own apology in such a difficult matter is no time to seek fault in the actions of others. They did shut up for probably exactly the same reason than you did and after all you profited most from being silent as you are even more “famous worldwide”.

It also needs to be acknowledged that people did speak out, were ostracized for it, removed from the teachers list, blocked on social media, insulted and verbally brutalized. I was screamed down on several occasions when I aired criticism at your grandfather and many others had similar experiences. We were “removed” from the community. Deleted.

Using your apology to deliver yet another blow to those “world famous Lakshmipuram teachers” (only recently you took them off your teachers directory) makes it appears as if your agenda is to make yourself the sole hegemon of Ashtanga. But this was your agenda ever since you took over from your grandfather, wasn’t it? And your mother, your uncle and those Lakshmipuram teachers continue to be obstacles in your path.

A few sentences further down then you ask the victims to forgive KPJ. That’s a double-edged sword. It’s almost like putting a timeline on the coming-to-terms process, i.e. “I’ve apologized now you should forgive”. You have to give the victims the choice to forgive in their own time or also to not do so. They may do so when they are ready or they may not. But it’s their choice and there can be no coercion or pressure.

Then, are you aware that until this day some of your lieutenants slander and discredit some of the women that spoke out against your grandfather? Those heroic women who spoke out first faced those attempts right from the beginning. But the slander and discrediting are going on until this very day. How would you feel if the leader of the people who are trying to destroy you, after years of ignoring you comes out with a lukewarm apology? An apology in which responsibility is passed on to others and then a few sentences later they ask for forgiveness? Wouldn’t we have to first set things straight and reach out to the victims?

Finally, I’m wondering why now? So many people complained verbally through the decades. Anneke was the first who wrote it in 2010. Then Karen Rain spoke. There were articles in the Yoga Journal, Elephant Journal, petitions on change.org, so many students wrote you open letters, rescinded their authorization and certification, even asked you openly to take them off your directory. The Walrus article, the videos of your grandfathers adjustments taken off the web over and over again, yet they popped back up. Karen Rain’s video that gave us for the first time a visual testimony of the destruction your grandfather had wreaked on a human being. Jubilee Cooke’s excellent article. Then Matthew Remski’s book painstakingly documenting it all. Through all of that you had this amazing Teflon personality. Water on a duck’s back. It all peeled off you.

But then came Magnolia. Three weeks ago, one of your long-term students, certified and assisting in your shala threw everything away. She closed her studio, stopped practising and walked away from your yoga for good. And she wrote that she did it because you didn’t apologize. She had rather no yoga in her life than the yoga of an abuser, your grandfather. Was it that that caused the crack in your armour?

But I think there is another thing we need to talk about. The parampara. You call yourself parama-guru- the supreme guru. That’s a title that is usually reserved for God, the guru of gurus. In fact, on your Instagram feed to your post one of your students says, “Immense respect to you sharathji🙏 it’s takes a lot to speak up firstly, and when it involves ur idol/ guru all d more painful…..but you are God’s chosen one….may you continue to touch every person’s life with such honesty”. God’s chosen one? Do you agree with that or would you want to correct this projection of your gullible student? Or do you happily go along for the ride? Your grandfather was a master in the maintenance of such projections.

Another response on your Instagram feed states thus “For me, Guruji Sri Krishna Pattabhi Jois remains flawless and the whole world will not change my vision. There is Shiva, Guru and Yoga and nothing else matters!” Deeply worrisome but then it’s a divinely handed down lineage, right. The above statement is internally consistent with that belief.

A parampara implies that one has received a title through a long lineage of teachers. In your case your grandfather. Now I’m asking you, can a spiritual lineage, a parampara be handed down through somebody that performs sexual abuse and assault (not to mention dry-humping and digital rape)?

Think well and don’t hasten. Take your time. Because if you say “yes” then arguably the term parampara means nothing anymore.

If it is “yes”, if there are no moral standards on those who hand down a lineage, we may as well all start our own paramparas. Or we could as well call your parampara “par-hump-ara” or “dry-humpara”. These would be all feasible consequences.

If your answer though is “no”, if there is in fact a moral standard for paramparas then your grandfather does not qualify for handing down a parampara.

In this case you did not receive a parampara!

You should then rescind the title parama guru. A title that you advertise ‘til this day on your Instagram account.

Save your soul, Sharath, and stop this narcissism. This self-aggrandisement! In any case wasn’t it one of those world-famous Lakshmipuram teachers who arranged the bestowing of this Parama title on you?

I think for the benefit of this yoga, this community it is necessary that you step down from this title (which was manufactured anyway). Ashtanga yoga is more and bigger than you, your grandfather, the Jois family. So many people have stopped practising Ashtanga because of your botched handling of this crisis. Do not damage this yoga any further.

This whole abuse was only possible because of this stratification and hierarchical order created by your grandfather and maintained by you. We should all just be sisters and brothers in yoga and no more looking up and down at each other in artificially maintained hierarchies.

Enough damage has been done to unsuspecting young people, who still believe that you are god-like or that your father is beyond reproach whatever he may have done. You can still teach and make Millions. But not continuing to use this title. It is morally bankrupt to do so.

PS About 18 months ago when this story finally broke somebody suggested that Ashtangis should place the photos of the victims of Jois’ abuse on their altars instead of images of the Jois family. At the time I thought this suggestion to be flippant. I don’t really have an altar and I’m no friend of person worship at all. But Anneke, Karen and Jubilee taught me so much more about bravery, courage and honesty than this bogus-parampara ever could. Isn’t that what yoga is truly about?